The Clearing Mist at Whitewell

I’ve concentrated mainly on sharing vlogs here on my site this year, but this shot I felt deserved a proper post of its own. It’s just my own opinion, but I think that this is possibly the best photo I’ve ever taken. I hope it comes I took it so quickly I didn’t really take it in at the time – I was flying the drone meanwhile and had to snap this quickly and one handed before giving the flying my full concentration again. But then when I got it up on the computer I realised I had something special. I spent less than a minute on the processing.

A photographer naturally has a very different connection to their own work than that of someone else, so it will not surprise me or disappoint me if you don’t connect with this image in the way that I do. But it’s difficult to explain just how important a shot this is to me.

This is my place. When I’m bored or worried and would rather be somewhere else, this is where I’m thinking of. It’s so familiar to me now that I can walk through it in my mind and picture every stone and tree. Sometimes I dream about being there. I’ve photographed it at every time of day in every kind of weather in every season for nearly a decade. I have taken many thousands of photos in this location, and hundreds of this specific view. Of all those hundreds of days I have never seen a more captivating scene than this.

A couple of weeks ago I came up here for some photos, only to be approached by a chap who had unfortunately locked himself out of his car and lost his keys in the wood. He was not a young guy, and he was wet and cold, had been out there for an hour without a jacket and was obviously in a bit of a pickle. To cut a long story short I did what I hope anyone would do in that situation and drove him home to Kirriemuir (about a 5 hour round trip). The poor guy just needed some help, but perhaps this scene was good karma. 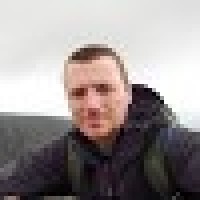 David Russell
David Russell is a photographer and writer from Scotland, living in the Highlands in the Cairngorms National Park, best known as a forest photographer with a passion for Scotland’s ancient Caledonian Forest. David’s work explores the power of living places to unlock profound human experience and our deep personal connections to nature.

I happily stumbled across your work and THANK YOU so much for posting such beautiful pictures. They stir something deep within my soul.